A visit to Smögen Whisky

After many years of eager anticipation, last week I had the opportunity to visit the Smögen distillery. I first met Pär Caldenby ten years or so ago, and I have followed his progress with interest.  We have been importing Smögen whisky to the UK since it first came of age, so it was a privilege to spend the day with Pär at his distillery.

Pär more or less designed the Smögen distillery himself and runs it single handedly. This makes for long days, and requires an ability to multi-task like a solo yachtsman. The mashtun and wash backs have been adapted from former dairy tanks. The whisky stills and spirit safe were built to order by Forsyths of Rothes, whilst the gin still and its copper worm tub came from Portugal. The compact layout relies on gravity; why bother with less reliable pumps?

The scale can at times seem small, at one point Pär explained that the next job was to clean the heat exchanger. I pictured something the size of a washing machine, but the heat exchanger in question was more toaster size. That said, the compact size of Smögen is for me part of the charm. Many have dreamed of building their own distillery, and here Pär has proved it can be done, in a way which means he has managed to keep control of every aspect. This is distilling solo, with a single minded determination to produce spirit the way you want to do it. So far Pär, as the distiller proprietor, has distilled every single drop of Smögen and Strane personally. Not many distillery owners can say that! 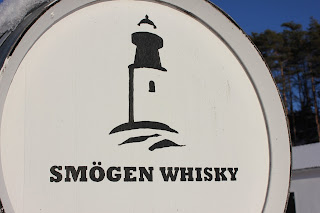