Festive tastings! We are looking forward to sampling Angels' Nectar Blended Malt Scotch Whisky at ‪Deli Mair‬ in ‪Aviemore‬ on Wednesday the 23rd from 2PM and at Elephants in the Pantry in ‪Grantown‬ on ‪Hogmanay‬ from 1PM. Do come and join us for a ‪dram‬!
Posted by Robert Ransom at 07:48 No comments:

Thank you to the Angels

November 2015 marks a year since our first bottling of Angels’ Nectar, so naturally it’s a time of reflection on our journey so far. Setting up a new business and launching Angels’ Nectar has been an exciting and rewarding roller coaster. Yes, not everything has gone according to the business plan written in the long dark winter evenings of 2014, but there have been plenty of highs, some quite unexpected.

Where are we now? Angels’ Nectar is now available from more than thirty stores across the UK and in five European markets. Our label won the Scottish Creative Award for Illustration, and Angels’ Nectar was a finalist in two categories in the Highlands and Islands Food and Drink Awards, and a finalist in the Scottish Field Whisky Merchants Challenge. This wouldn’t have been possible without the help, support and advice of many people, our very own ‘Angels’. You know who you are, crunching spreadsheets, helping with cask samples, working magic with EMCS, reacting positively to more crazy ideas, and generally getting behind our fledgling whisky brand.

The list of people to thank is a long one, but amongst others our Angels include our illustrator Brett (check out his reflections on the project here), Craig at The Green Welly Stop, our first ever stockist, Paul and Edgar, who took Angels’ Nectar to the Netherlands (how many other Scotch Whiskies have their own Dutch website?). Nadine, Jean-Marc and Olivier, our new Belgian friends and of course the guys at Old Worthy Brewing Co. for the genius that is The De’ils Awa’. Last but not least are all those who have indulged in a dram of Angels’ Nectar, without whom this would have all been in vane. We raise our glass to you.

Posted by Robert Ransom at 13:17 No comments:

Strane is created in a 100 litre copper pot still with worm tub condensers, at the Smögen Distillery. Established in 2010, Smögen was one of the first distilleries in Sweden to produce Single Malt Whisky.  Unusually Strane is created by distilling three differently balanced base gins; junipery, citrusy and herbal, and then blending to create different expressions in bottle; Merchant Strength 47.4% vol., Navy Strength 57.1% vol. and “Uncut”.  With the blending taking place before the addition of water, the distiller and proprietor Pär Caldenby, regularly tastes ‘uncut’ gin, and felt ‘it is too good to hold back’, which led to this unusually high strength bottling.

Whilst exceptionally strong, Pär suggests savouring Strane “Uncut” neat, ice cold, in very small sips, with a glass of water on the side. At first it will be discreet due to the ice, then progressively increase in strength of character and power, until it simply goes into juniper overdrive.

Smögen have not set out to start a 'strength race', more the exceptional strength of Strane “Uncut” reflects the unusual way Strane Gin is produced, borrowing techniques from whisky production. Blending is common practice in whisky, and in some ways Strane “Uncut” is a similar concept to Cask Strength whisky. The result is exceptional, and an experience for gin enthusiasts to savour with care and respect.

Strane “Uncut” Batch 2 is available to try at bars including the Old Bridge Inn in Aviemore, the Greenroom in Perth, the Jolly Botanist in Edinburgh and the Lazy Lounge in Leeds. Or for a bottle amongst others visit J.L. Gill of Crieff, Gauntleys of Nottingham, Master of Malt and Shop4Whisky.

Posted by Robert Ransom at 09:01 No comments:

We are pleased to report some fantastic news from last night’s Scottish Creative Awards. Our designers, Pocket Rocket Creative, won the Illustration Award for their wonderful work on our label for Angels' Nectar.

Our brand takes the much loved story of the Angels’ Share from whisky folklore and presents it in a contemporary fashion. At the core of our label for Angels’ Nectar sits an Angel shaped ethereal mist within which a series of smaller Angels can be seen enjoying their share. Getting the tone and feel of the illustration and label right was essential, and we are delighted with the result. It is fantastic that illustrator Brett Breckon and the team at Pocket Rocket Creative have been recognized publically for their efforts.

For more on the awards, hosted by The Drum, please see www.scottishcreativeawards.com 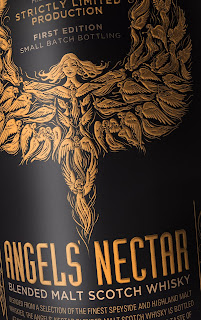 The winning design, and the prize! 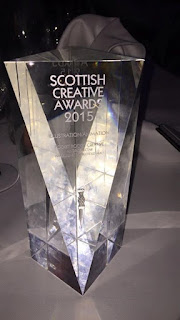 Posted by Robert Ransom at 03:08 No comments:

Half n'Half fun in Dufftown

We are looking forward to our joint tasting with Old Worthy Brewing Co. for the Whisky Shop Dufftown Autumn Festival on Friday the 25th of September. Join us and try The De'ils Awa Red India Pale Ale designed to pair with Angels' Nectar, Wild Bill's Aces & Eights to pair with Edradour, and A Midnight Caper for Tomatin.
To book here follow this link: http://www.whiskyshopdufftown.com/…/25-september-2015-1330…/ 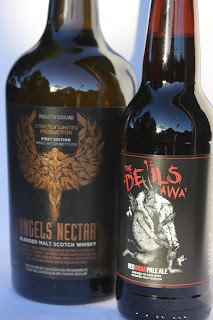 Posted by Robert Ransom at 01:33 No comments:

Angels’ Nectar Blended Malt Scotch Whisky has been shortlisted in two categories in the Highland and Islands Food and Drink Awards, for the New Product Award and Best Drink Award.

Highfern’s entry was among a record-breaking 100 entries to this year’s awards.  The Highlands & Islands Food & Drink Awards are now in their 11th year and include 13 categories ranging from the Young Shining Star and Restaurant of the Year to Export and Healthier Food & Drink. Speaking as he received the good news about their shortlist success, Highfern founder Robert Ransom said:

“We launched Angels’ Nectar just seven months ago, so to be shortlisted for two awards at this stage is fantastic news, and comes in the same week as we dispatched our first order to Belgium”.

Inspired by the Angels' share, the traditional name given to the evaporation during the maturation of Scotch Whisky, the First Edition of Angels’ Nectar Blended Malt Scotch Whisky has been created from a selection of Speyside and Highland malt whiskies, and is smooth and sweet with hints of heather honey and lemon on the taste.

Judging for the awards took place last week at The Storehouse of Foulis with a panel of thirteen judges examining the entries and tasting produce from across the Highlands and Islands and Cairngorms National Park.

With 2015 marked across Scotland as the Year of Food and Drink, this year’s awards look set to be higher profile than ever before.  The winners will be announced on Friday 23rd October at a glittering awards ceremony at the Kingsmills Hotel in Inverness.   The host for the night is comedian and broadcaster, Fred MacAulay who is returning for a third year by popular demand.

For full details of the Highland and Islands Food and Drink Awards, please see www.hifoodanddrinkawards.com
Posted by Robert Ransom at 01:39 No comments:

Strane "Uncut" is the strongest Gin*

How do we know Strane "Uncut" is the strongest gin? Well first of all we are not aware of another gin which is stronger.

Secondly, David T Smith of Summer Fruit Cup, who has reviewed over 300 gins, is also not aware of a stronger commercially available gin. Interestingly David notes in his review of Strane "Uncut" that the previous holders of the title would be Blackwoods and Finsbury, both at 60% Vol. for unaged gin, and for aged gin, an Alambic bottling.

Thirdly, Strane "Uncut" is the strongest gin available at The Feathers Hotel, a hotel which offers a choice of 264 different gins.

Fourthly we have enjoyed some coverage of Strane "Uncut" in the drinks press over the last couple of days, and so far no one has come forward to say another brand is stronger!

So Strane "Uncut" would appear to be the strongest available gin in the UK, if not the world. I doubt we will hold the title for long. Someone somewhere is probably working on something as I type. It has not been our intention to start a ‘strength race’, "Uncut"’s release has led from the unusual way Strane gin is created; three differently balanced base gins; junipery, citrusy and herbal, are distilled and then blended to create different expressions in bottle; Merchant Strength 47.4% vol., Navy Strength 57.1% vol. and now “Uncut”. With the blending taking place before the addition of water, the distiller Pär Caldenby, regularly samples and noses Strane gin at receiver strength.  Pär simply felt Strane in its uncut form was ‘too good to hold back’. With an increasingly crowded gin shelf we need to shout about what is different, and with Strane "Uncut", it is the strength.

Strane Uncut will only be produced in limited quantities. Intriguingly as it is over 70% alcohol, our order was shipped from Sweden as Dangerous Goods, or to be more precise as ‘UN3065 / Alcoholic Beverage / Class 3/ PG (packaging group) II in limited quantities'. This, as you probably guessed, costs extra.

Whilst exceptionally strong, Pär suggests trying Strane “Uncut” neat, ice cold, in very small sips, with a glass of water on the side. At first it will be (relatively) discreet due to the ice, then progressively increase in strength of character and power, until it simply goes into gin overdrive. With “Uncut” there is a mighty surge of power and strength of character, and it is rich in juniper, lemon peel, sage and mint. Strane “Uncut” is not an everyday gin, but a remarkable experience for gin lovers. Of course you are also welcome to experiment with Strane "Uncut" in your favourite cocktail.

Strane “Uncut” is now available to try at The Feathers Hotel in Oxford, the first bar outside Sweden to offer this extraordinary gin. A limited number of bottles are also available to purchase from Drinkfinder (Constantine Stores), Gauntleys of Nottingham and Master of Malt.

Posted by Robert Ransom at 13:44 No comments: